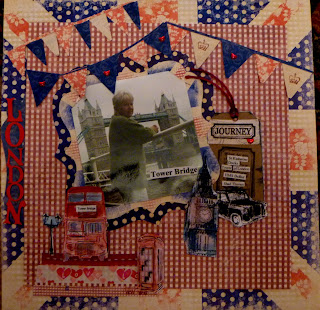 The word at Bird Is The Word is Journey.  I'm just scraping in as it closes in 2 days!
My photo was taken in the mid 90's on one of my many journeys down to "the Smoke" as it's affectionately known in the Midlands. My daughter was living and working there then so on a Friday I would pack my rucksack,take the bus to work in the city, then get the train down to London after I finished. The journey took 90 minutes and then I'd get the underground to her flat for the weekend. We had such fun exploring London by day and sampling the Cosmopolitan cuisuine by night.
I used some new papers and stamps by Do Crafts  Papermania designed around the Portobello Road in London, for my layout. I made my own bunting from the papers and have hidden some info about Tower Bridge along with my journaling, behind my titling which pulls out. 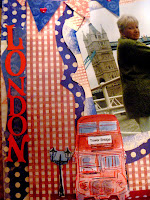 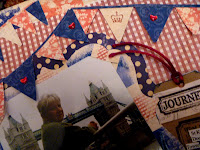 I stamped the images of the London Bus, post box, taxi and telephone box and Big Ben, coloured with TH Distress Inks in Red, blue and black.
It's a big year for the UK this year with the Queen's Diamond Jubilee and the 2012 Olympic's being held in London so I thought I'd make some souvenirs too to celebrate.
Watch out for a Giveaway coming soon!
Posted by jeanie g at 04:31