The colours this month at CIS are so vivid and versatile. See them HERE for yourself. I chose a photo of a Christmas family get together where we wanted to be altogether with My Mom and her 4 Children, 8 Grandchildren and the four new Great-Grandchildren who had all been born during the previous 18 months. 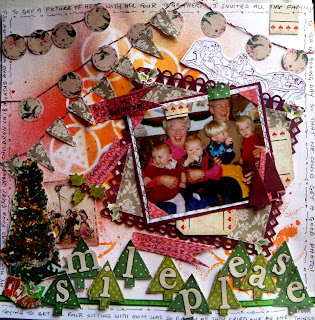 It was hilarious trying to get them to sit with Mom and smile, as soon as we thought they were ok one of them would either get down and runaway or start crying which set the others off. In the end my son joined his Nan on the sofa with his daughter and his great nephew on his lap while Mom held on to the other two. Their faces made the picture! 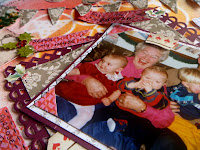 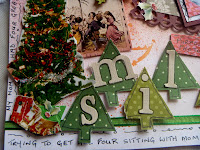 I chose to spray misting inks to make the red pepper colour onto the background paper from WRMK white out collection. The aubergine is from Papermania colour coordinates and the patterned papers from Christmas backgound papers.  For my testimony I journalled around the perimeter, telling the hidden story behind the photo, about a slice of life, setting the scene with banner flags. I used face and hidden as my inspirational words.
For my evidence I used a frame around my photo which I die cut from my border die and decorated with die cut holly leaves, the photo had photo corners, I created a border along the bottom of my LO with small christmas trees which were also the tiles for my title. I cut the circles for my banner with my small circle punch from holly leaf paper and used bakers twine in aubergine and  red. The larger christmas tree I cut from another photograph along with the small parcels at the bottom. The santa/reindeer stamp was inked with  aubergine/eggplant colour TH Distress ink.
I know it's a busy page but to me it says HAPPY CHRISTMAS.  Hope you like it and thank you for any sweet thoughts you leave. xxx
Posted by jeanie g at 06:30