The little egg featured on this page 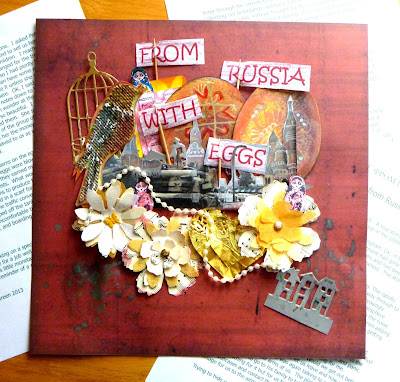 has a huge story to tell.  A true story, told to me by the lady who gave it to me, of the Coup in the USSR, in August 1991.
I was working at the University in Birmingham, UK, in the School of Librarianship.  The Head of the Department had gone to Moscow for a World Conference of Librarians and had been in Moscow for a few days when the Coup happened.  The story continues………

Our taxi to the Conference was taking ages today. The rapidly building traffic making it impossible to find a way through to the Square.  Our interpreter, Peter, was looking increasingly serious and talking to the driver in Russian.  The atmosphere around us smelled of fear and panic; the air filled with the noise from other cars, horns honking, and the revving of engines adding to the ever increasing rumble of something much bigger, getting louder and louder.

Peter spoke to us, telling us it wasn’t safe for us to try and get through to the Conference as Army tanks were assembling in Red Square and he had instructed the driver to take us back to the hotel.  We sat in the back of the taxi sick with fright and panic.  My thoughts were for my family at home waiting for me. Questions were given voice around me. Would we get out before any firing started, would they even let us leave and how would we get to the airport?  The driver was again talking to our Interpreter in Russian and waving his arms at us.  The plan was changed, the taxi driver wanted to go to his family to take them to safety.  There was nothing for it, Peter said but for us to go on foot to the hotel, pick up our suitcases and passports and contact the British Embassy to organise safe passage for us to the airport.

Trying to hide our fear, and look like fellow Russians, we followed Peter through the streets to the hotel.  He asked us to be quick in collecting our belongings and meet him in the foyer.  I threw every thing into my case, without thought for the crumpled state they would be in, sat on it to close it quickly, then hurried downstairs to meet up with my colleagues in the foyer, passport and air plane ticket in my hand.  Peter came off the phone, just as the last of the group arrived, and he addressed us all.  Please don’t panic he said, transport with an armed guard has been arranged for you to leave immediately.  All delegates at the Conference had been assured safe passage but they must leave immediately!  We walked out, in single file, clutching our cases and waving our passports like flags, hoping they would give us protection.  Fear gripped us again as a huge tank came trundling around the corner towards us. Rooted to the spot, we were helpless to avoid it’s path.  It swung towards the pavement then stopped.  Two armed soldiers alighted and came towards us brandishing heavy machine guns.

The older of the two spoke with Peter who looked at us and nodded.  Please give your cases to the soldiers and let them help you onto the tank he said.  Incredulous, all four of us looked at him with dropped jaws.  You expect us to ride on that, a male colleague asked?  It’s the only way to get you to the airport in safety, he replied.  One by one we were helped onto the tank with Peter finding us places to sit. The engine started, the tank seemed to draw breath, shudder and burst into movement, nearly unseating us from our precarious positions. Our exit was slow but steady and we started to leave the centre behind us with the ever growing pandemonium of a city in flight, snaking in front and behind our tank.  People walking along the road, some with bags, cases, prams and carts, pleaded with the soldiers to let them ride with us but the soldiers ignored them.  It was a long, slow uncomfortable journey,  my thoughts were for all these people being uprooted and forced to flee their homes.

We came alongside a cart, full of straw and hay, driven by two horses.  Sitting atop the hay was an old woman and two young children, both crying and clutching each other for comfort.  The old woman stood up precariously, as we came level with the cart, and held something out to us, calling in a pleading tone.  I asked Peter what she was saying, he told me she wanted to sell us her painted eggs so that she could buy food for the children.  I reached for my purse and drew out my roubles I’d exchanged for the trip.  We were meant to be there for two weeks so I had plenty left.  Tell her to keep her eggs, I said, but she can have some money anyway.  No Peter said, she won’t take it unless she sells something.  That’s how people are here.  OK, I said, I’ll take an egg in exchange.  He passed some notes down to her and she handed back four eggs.  I gazed in wonder at these exquisite masterpieces, all different but all so beautiful.  I smiled my thanks and asked Peter to tell her I loved them.  She smiled a toothless smile back at me, called to one of the group of women walking alongside the cart and handed her the money.  The women all looked up and cheered and waved to us as we slowly gained ground and left them behind.

Peter told me that the patterns on the eggs were all hand drawn by the women, after the eggs were blown and painted by the children.  This was how they earned money to feed themselves, selling the eggs to tourists.  What would happen to them now, I wondered, with no hens to produce the eggs.  I tucked them into my handbag, wrapped in a scarf for protection.  The last few miles were very slow as the traffic converged on the airport road, then we were being helped off the tank, and taken through into the airport.  A long, uncomfortable time waiting, then we were finally through customs, and boarding a plane home to the UK and our families. 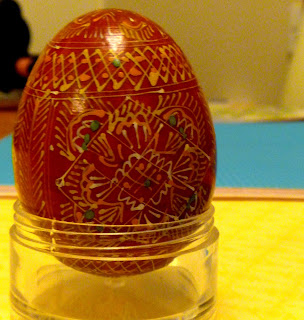 I'm linking this to Storytelling Sunday at Sian's Blog, why not pop over and read some more stories there.
I’d been working on a special project while my boss was away and to thank me for a job well done she presented me with this little egg.  It has little monetary value but will remain with me, a constant reminder of a day in Moscow that changed the course of history!

I wrote a story last month too but was too late to link it to Sian's blog.  If you'd like to read that one it's HERE.   Thank you so much for looking and reading if you got this far and if you leave me a comment that's great, it means so much to get them and I love reading your stories..