It’s that time again ….. Storytelling Sunday at Sian’s Blog
and my story this month isn’t of a precious item to take with me but rather a precious memory.

I also took part in Sian’s Swaps where 40 lovely fellow bloggers joined in to collect a small parcel of bits and pieces to post on to the next name on the list. I posted to Jo in Australia and she loved her parcel. Here’s what Lizzie sent to me. 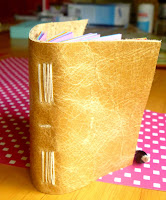 Aren’t they all great?  That delicious little book she made has already been written in, it’s my little book of positive words!  Thank you so much Lizzie. 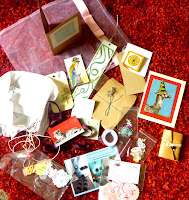 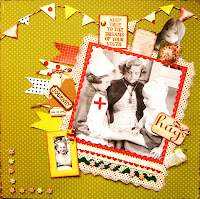 While making a layout with the theme “What did you want to do when you grew up” for the May challenge at Another Freaking Scrappy Challenge, it got me thinking about the story behind why I always wanted to be a nurse........
Here it is.....................
When I was around 6 yrs old we didn’t have much money to spend on toys for us kids.  Dad had been away in the Army for the first four yrs of my life, on his return there was an extra mouth to feed.  On his demob, he had gone back to his old job in the Lucas factory and Mom did a little part time job at the same factory, in the evenings, when Dad came home to look after us.  She did this job to save up for Christmas so we would have presents from Santa. My sister and I had a beautiful baby doll each, that Christmas, with a soft stuffed body and a little papier mache head, complete with eyelashes and a rosebud mouth.

I loved my doll and would play in the garden, arranging her and my other odd assortment of matchbox dollies, in a circle to have a tea party.  One afternoon I was out there with my dolls when a sudden torrential downpour started, complete with thunder and lightening.  I scooped my dollies up in their blanket and ran indoors.  I was already soaked and frightened by the thunder and lightening so I went straight upstairs to change and get dry.  What I hadn’t realised was that my beloved Rosebud  was lying face down in the rain.  She lay there all night and next day when I found her, her face was a mess.  I was heartbroken, Mom was very nice and said not to worry we could take her to be mended at the Dolls Hospital.

I had seen the hospital from the bus on the way to my Aunt’s house and always wanted to go in. It was a double fronted shop with a red cross in the window and the name Dolls Hospital written in large letters above the door.  Inside, the shelves were full of doll parts in different sizes, with the heads all facing front, looking very menacing to a small child.  A lady came up to us wearing a nurses uniform and took my little Rosebud from me.  We’ll soon have her as good as new she said briskly, disappearing behind a curtain at the back of the shop.  We were told to come back in two days to collect Rosebud and I couldn’t wait to see her again.  There she was with her head as good as new and off I skipped down the street with her.  From then on I wanted to be a nurse, so I could mend people the way my doll had been mended.

While thinking of this story I also remember how dangerous our childhood was at times. This particular year, Dad had been offered overtime, which meant that between 6pm and 7pm we 3 kids were left on our own, with the next door neighbour to call on in an emergency???  Unthinkable today but back then we grew up fast!

You wouldn’t believe what 3 little kids could get up to in that hour!!  My little brother, age two, was stationed on the stair well window where he could see Dad cycling down the hill from work. He’d clap his chubby little hands shouting Daddy’s coming, so we girls, ages 6 and 8 yrs old could clear up from whatever skulduggery we were up to.  That year my brother could be bribed  to stay on the stairs with a square of chocolate from my monthly choc bar allowance. We were rationed to one bar per month then and would be for the next 3 years.  Later he learned the value of his role and when his demands were refused by us girls,  he went on strike, refusing to tell us when Dad was coming down the hill …….. but that’s another story!

My big sister’s favourite thing was cooking and she would make us lovely, thick, fried, potatoe scallops in the chip pan!  We would invite the local kids round and they paid a penny a scallop doused with a generous helping of salt and malt vinegar from the barrel.  Delicious!!  We didn’t see any danger in using hot fat on our own.  Another  favourite was bubble toffee, made by boiling sugar and adding bicarbonate of soda when the sugar had melted down, making bubbly toffee.  After you’d eaten a few pieces though you had a bad tummy ache!!

My favourite was to have all the kids round to be bandaged up with an assortment of materials ranging from Dad’s best handkerchief to Mom’s dish cloth or operated on, with a knife from the kitchen, luckily it was very blunt!!  We had fake blood made from the juice of berries from the garden, still not sure if they were poisonous or not??

I can’t believe we survived our childhood but we did……….